Both lucerne and red clover are grown extensively for silage because of their superior feed value and ability to fix atmospheric nitrogen back into the soil. They also have the added advantage of being drought tolerant, meaning they can be grown widely. Both silage types are associated with higher intakes and higher animal performance than with grass silage, with red clover often associated with improved nitrogen (N) conversion to product N (milk or meat N). Although red clover can be directly grazed with high intake characteristics due to the low NDF content at the leafy stage’s farms must avoid grazing lucerne due to the risk of bloat.

Lucerne preferentially grows in well drained chalk and limestone soils and has a very low tolerance for acidic conditions (below pH 6.2), with pH adjustment of naturally acidic soil unlikely to support lucerne growth. Red clover is more tolerant of acidic pH, tolerating pH down to roughly 5 (though red clover is subject to manganese toxicity below pH 5.7), but in order to achieve optimal yields soil pH should be adjusted to between 6 – 6.5.

A fine, level seed bed should be prepared pre sowing which aids the establishment of both red clover and lucerne, with rolling both pre and post sowing to assist germination (bringing seeds into close contact with soil) and both forages achieve optimal persistence through correct soil P and K levels (higher demand than grass). Both lucerne and red clover establishment is assisted by a top dressing of circa 25Kg Ha-1 nitrogen after rolling (both are surface feeders and adsorb most of their requisite P and K from the topmost level of the soil). A wide seeding period exists between April and August, with both seeds being planted between a depth of 5 – 15mm and a minimum soil temperature of 6C for germination of red clover (ideally over 10C) and 10C for germination of lucerne.

Sowing red clover in spring ensures maximum yield in its establishment year compared to sowing in autumn, and maximum yield for future years production. Spring sown red clover will achieve approximately 60% of its potential yield in the establishment year, and equally lucerne benefits from the moisture levels during earlier sowing with late sown lucerne taking a full 12 month cycle to reach its maximum yield due to energy partitioning between root development and growth. 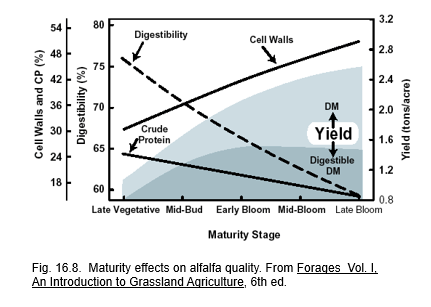 Growth of both Lucerne and clover follows a similar pattern to grass with yield and persistence dependent on proper establishment which affords deep root growth. As the day length becomes longer  (photoperiod in excess of 12hours) both lucerne and red clover commit the majority of energy to plant growth and away from root development post establishment leading to rapid stem elongation, leaf development and protein formation in the forage whilst lignification is relatively low until either plant begins to bloom.

Commercial red clover grows with a hollow stem with reduced rigidity compared to native clover meaning that waiting for the clover to flower risks the crop lodging in the field, and the clover should be cut when the clover reaches late bud stage (at a plant length of approximately 30cm) or when the lucerne is approximately at 10% bloom.

Feed value of both red clover and lucerne is concentrated in the leaf of the growing plants, with the leaf of both clover and lucerne containing 70% of the plant protein and up to 90% of the plant minerals, and significantly less indigestible fiber. Maintaining the maximum amount of leaf on the harvested plant is critical to optimising the feed value of both forages once ensiled. 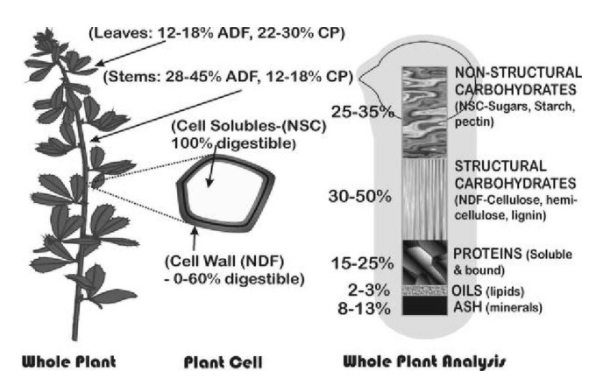 Harvesting and Ensiling Lucerne and Clover 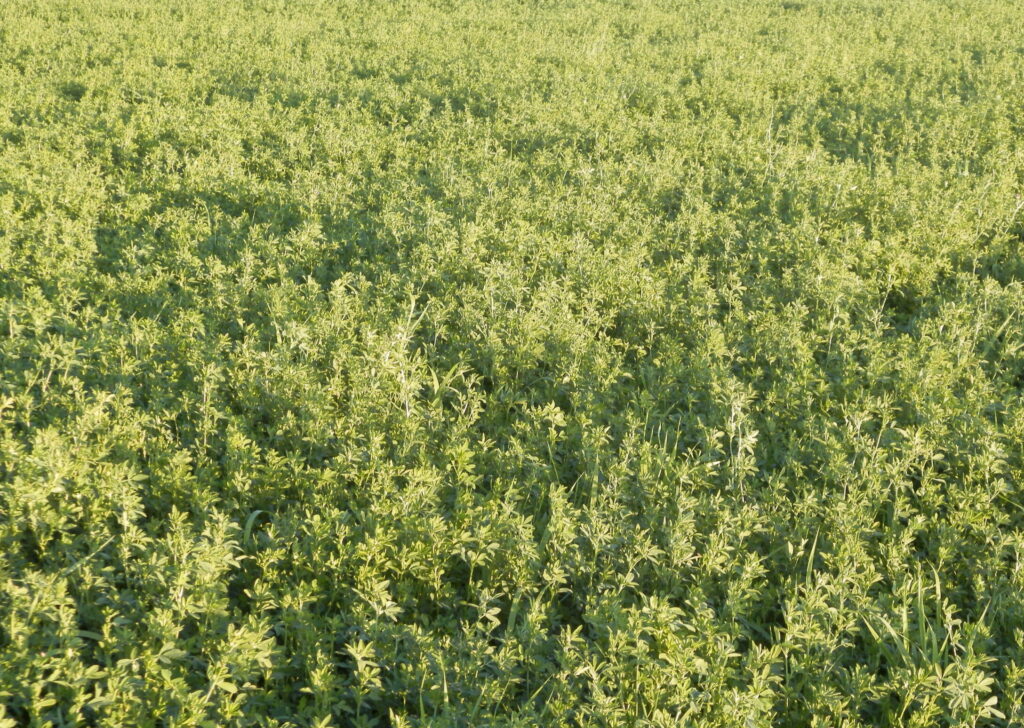 As with all grass and legume silage, there is a significant balance between yield and digestibility of the forage, with the earlier the forage being harvested the lower the lignification of the crop, the higher the milk potential of the harvested forage but the lower the yield per Ha. The farm must take in consideration annual feed requirements and forecast environmental considerations  in deciding when on the comprise between yield and feed value. Both lucerne and red clover should be cut at 7.5 – 8 cm from the ground so as to not damage the crown of the plant and to maximisse future re-growth of the forage. This cut height allows good air flow underneath the cut forage to aid wilting.

Typically, lucerne will be cut when the field is at approximately 10% in bloom

Lucerne and clover are low DM, low sugar and high buffering capacity (due to protein levels) forages when cut and it is necessary to wilt them. Mowing with a roller-conditioner greatly increases the speed of wilting of the forage without reducing protein content buyt the use of flail-tine / impeller conditioners must be avoided as these lead to exceptionally high leaf loss.

Under good wilting conditions (light wind, dry, 25C+) work has shown no nutitional benefit in wide swathing cut lucerne or red clover and a swath width of 1.2 – 1.5m gives the same feed value silage as a 2.4 – 2.7m swath, though the wilting time taken to achieve 30%+ DM is dramatically reduced, however under sub-optimal wilting conditions the cut forage should be wide swathed where possible. Irrespective of wilting conditions, raking of the cut forage should be undertaken before the morning dew has evaporated to minimise leaf shatter in both forages.

Clean silage will aid the the fermentation

Ensuring the as little contamination is introduced during forage collection and ensiling is always important, but, because of the high buffering capacity of both forages (meaning that more acid needs to be produced in order to  achieve a stable pH) it is crucial to ensure the forage is as clean as possible from the field. Rake height should be set to take into consideration and undulation in the fields (and adjusted between fields as necessary) and where possible a merger should be used to minimise both soil contamination and leaf shatter.

Lucerne and red clover are suitable for baling, agbagging or ensiling, but because of their high buffering capacity and relatively low sugar content they greatly  benefit from the use of silage additives to optimise the speed of fermentation and maintenance of protein, digestibility and dry matter. Due to the hollow stem in red clover the pore space in the final silage is greater than with grass and lucerne silage meaning that aerobic instability at feed out can be an issue at lower than expected DM levels .

Depending on the expected rate of feed out of red clover silage the farm may benefit using a heterofermentative product at 30 – 35% DM to assist with longer term stability.

Both red clover and lucerne silage can be made up to high DM levels (toward 45%) but the farm must consider the  risk of leaf shatter during compaction and feedout when at the higher end of the DM scale and at this point may consider it beneficial to bale the forage with a minimum of 6 layers of wrap.

Timing of cutting of the forage (10% bloom for lucerne and late bud for clover) means that the ensiled forage has a relatively high degree of heterogeneity which is carried into the final silage, and, depending on the feed out method, into the daily ration. Feed out via a rake or defacer is highly recommended to overcome this issue.