After a very wet winter in most of northern Europe, the planting season progressed well from mid-April onwards, as conditions improved it ended by a typical year for growing corn for silage.

However, a large part of France faced increased losses and damage due to crows and other birds on freshly planted corn. This has been exacerbated with the reduction and banning of some repellents used to control bird damage, which has considerably reduced the options to regulate populations and limit crop damage

Crows and other birds tend to eat/damage the corn from after planting up to the 4-5 leaf stage. Following the planting line, they not only eat the seeds but can also tear the plant from the ground as they search for seed. The intensity of the attacks has led to some producers to replant partial or entire fields to ensure they have sufficient forage stocks.

Replanting damaged corn is not a perfect cure, it can add up to 300€/ha of extra expenses (seeds, fuel, time, yields etc). It can also worsen the damage as replanting means the birds have a secondary source of seeds and young plants to attack, which also means they stay longer in the fields, causing further damage. Hence the success of replanting can be somewhat limited due to continuous attacks and losses.

Another consequence of corn damage caused by birds is the emergence of weeds in areas where the corn has failed to establish. Excessive weed growth can increase the undesirable seed reserves in these areas for years, causing numerous problems. Several published studies have also shown that forage losses can be upward of 80% dependent on the density and harmfulness of the weeds encountered. Failed weed control can induce up to 20% of yield losses from nutrients and water competition (up to 3tonnes/ha). These losses are due to limited plant growth (fibre) but mostly from limited grain quantity and starch deposits.

In fields where bird damage is severe, weeding successfully is almost impossible.  Applying weed control to the damaged areas at a later period in the year is more hazardous and complicated unless farmers are equipped with high ground clearance sprayers and even then farmers are reliant on the weather to deliver enough moisture for the controls to work effectively 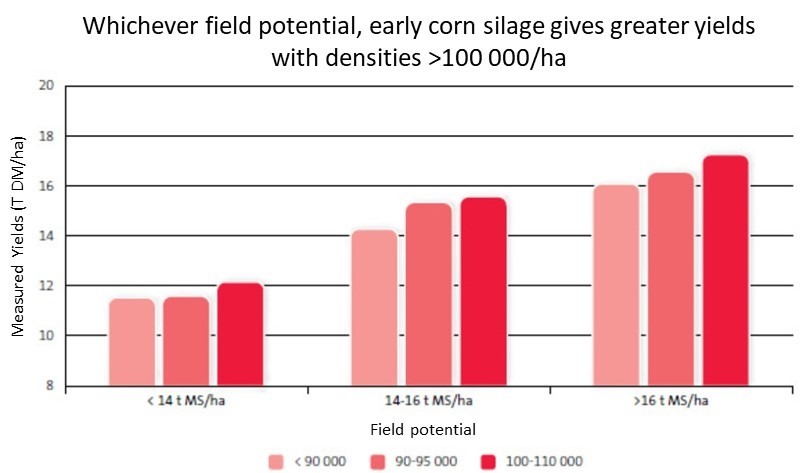 Bird damage can reduce stands density per Ha. This has a direct consequence on yields to expect at the harvest time.

The presence of some toxic weeds may induce further losses from lower animal performances. Nightshade and Datura produce potent alkaloids which are harmful to cattle (can be lethal if toxicity levels are high). Annual mercury can also be very invasive and has the potential to harm animals when consumed in high quantities, but even low levels can induce loss of performance.

Finally, the spread of maturity stages from mixed planting times in the same field results in heterogeneous forage quality at ensiling.  When producing corn for silage, the producer needs to harvest when the corn is at maximum quality with regards to yields, nutrients such as fibre and starch levels. When areas of the field have been replanted, this makes the decision as to when to harvest more complicated. If 30% or less of the corn has been replanted, farmers should focus the harvest on the corn planted originally.  When half of the field has been replanted, producers need to follow the maturity and quality of the corn accurately, accepting they may need to harvest what was planted originally a little later than normal. This is not all negative though, as later harvested maize (40% DM) will tend to benefit from the additional starch levels.

Farmers also need to take particular care to make sure the first planted corn silage is not harvested too late as this negatively affects the digestibility of fibre and starch, reducing the feed quality of the silage produced. If the second planting doesn’t have time to reach the optimal maturity and is harvested at around 25-30%, it will have lower starch levels but better fibre digestibility and it will be at less risk from contamination due to late harvesting maturity. Using a challenge specific forage inoculant which has been proven to improve aerobic stability of silage is recommended for corn of varying quality.  Using the correct inoculant will not only help maintain the feed value of the silage, but it will also significantly reduce wastage due to aerobically unstable silage.

Reducing the effects of bird damage requires a multiple approach and although none are totally effective, using a range of techniques gives the best protection. A well-packed seedbed helps limits attacks, while fluffy grounds allow birds to find the seeds more readily. Seed planting depth is also important, planting corn at shallow depths makes it all too easy for birds so corn should be planted at 4-5cm (2 inches) depths. The use of scare balloons and kites in combination with auditory repellents have been shown to reduce bird numbers. However, over time the birds become used to these repellents, so they need to be moved regularly to ensure their long term effectiveness.