Temperature increase is the main globally recognized parameter within climate change. All micro-organisms have an optimal temperature at which they grow best and a range of temperatures in which they are capable of growing at sub-optimal rates. Marley highlighted the thermal death points of common inoculant fermentation bacteria.  Once this temperature is achieved bacteria lose viability and have no further impact on the ensiling fermentation.

Various models predict the rise in temperatures under the direction of the Intergovernmental Panel on Climate Change, with the key indicator models listed in the accompanying table as part of the Special Report on Emission Scenarios. The models show varying degrees of temperature increases based upon varying levels of adoption of international environmental policies, with all scenarios predicting between a 36.8–44.6 degree Fahrenheit (2.7–7.0 degrees Celsius) rise in land temperature over the coming century which will be directly reflected in the ensiling temperature and resultant temperatures that the ensiled forage reaches during the first days of ensiling. 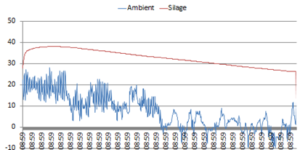 Forage temperature increases during the first days of ensiling as entrapped air is converted to carbon dioxide. The amount of temperature increase is related to pore space within the ensiled forage, dry matter, forage microbial profile, compaction method and sealing system used. The ultimate maximum temperature is also being related to the ambient temperature at the time of ensiling. Typically, a 50–59°F rise (10-15°C ) in temperature is observed in the silage compared to ambient temperature (the associated chart relates to the 2018 Czech corn silage from ensiling Sept. 2, 2018, to feed out in February 2019). During initial ensiling, the forage rapidly increased in temperature to 95°F (35°C), peaking at 100.4°F (38°C), which is generally above the thermal death point for Leuconostoc spp. (Leuconostoc spp. optimally grow between 68-86°F (20-30°C), with growth occurring between 41-86°F (5-30°C). (Bergey’s Manual of Systematic Bacteriology).

Being facultatively anaerobic, Leuconostoc are typically ensiling forage (unpublished genomic data) when the environment changes from aerobic to anaerobic. Ensiling temperatures of the Czech corn exceed the thermal death point of many species of Leuconostoc, which shifts the fermentation profile away to more heat stable, less efficient bacteria resulting in slower fermentation and greater losses of silage dry matter, digestibility and milk potential. The impact of global warming is to further adjust the normal microbial fermentation profile to one that is less rapid and less efficient in protecting dry matter.

High temperature increases fiber/lignin deposition in the plant. Schlenker and Roberts reported corn yields dropped when the growing temperature was above 84.2°F (29°C). When yields are challenged during the season there is pressure to maximize yield by lowering the cutting height. This action increases the high fiber fraction in the silage and increases the difficulty to compact, which leads to more entrapped air and a compounded higher temperature in the silage with greater difficulty for desired bacteria to survive/efficiently grow within the forage. These factors all lead to a greater loss in dry matter, digestibility and feed value.

To highlight the impact of minor temperature changes, increasing the temperature from 104°F to 113°F (40°C to 45°C) under optimal media conditions sees a 5.7-fold decrease in the growth rate of one of the most common organisms found in silage inoculants.

Fermentation organisms and the resultant fermentation of ensiled forage are impacted increasingly by the effects of global warming, with the impacts felt regionally or nationally, but increasingly frequently. It is crucial to farmers’ profitability that farmers, advisors and the industry recognize the issues a changing climate brings to all facets of farming. It’s also necessary the silage industry adapts to meet the demands of managing forages that need to be fed rapidly after ensiling due to lack of feed, but also silage that is harder to ensile and less stable once feeding begins.

Bacteria included within silage inoculants have different tolerances to temperature. If the ensiling temperature is above 86°F (30°C), the farm must be confident the inoculant bacteria will still be metabolically active and capable of driving the desired fermentation. The farm should ensure that products purchased have been independently tested and validated to be effective under their conditions of use.