Winter rye has long been grown across central Europe as a wholecrop forage after maize. And not only as additional silage but also to protect the soil from erosion. Unlike other cereals, rye enjoys an inherent drought tolerance making it a predictable winter yielder. Rye can withstand frost and has relatively high productivity under low-temperature conditions compared to other cereals. Combined with its deep root structure and ability to withstand a wide range of soil pH, rye is a sensible crop choice for silage in Central Europe and other areas with similar climates.

Rye is well suited as a follow on from maize, requiring a 5°C ground temperature to ensure germination (though Stopskof states optimal germination to be between 25-31°C). Post maize harvest nitrogen application can also aid plant protection if fields can become waterlogged over the winter months and the root system cannot respire

The silage produced can be used both as animal feed or as a biogas substrate. However, being higher in fiber content and lower in starch content than maize silage it may not be appropriate for all groups of animals (the high potassium content makes it generally unsuitable for close-up cows).

Rye silage should be managed in the same manner as all other small grain wholecrop being produced for silage. However, it does have specific characteristics that need to be taken into account to ensure the best quality silage is made. Rye has significantly more protein than corn silage which is beneficial to the cost of the diet, especially during the current high protein costs. This should be taken into consideration when harvesting, as the protein content increases the buffering capacity of the forage, making it more difficult to ferment as a silage. The use of a condition-specific silage inoculant is strongly advised. The hollow stem between the stem nodes means that there is a high pore space in the silage that, leading to a higher air concentration during ensiling. An extended presence of air during the initial fermentation can increase the levels of undesirable such as yeast and mould and decrease the effectiveness of any inoculant used.  Worse still once the bunker/silo is opened the air can penetrate the rye silage more readily, potentially leading to aerobic instability (heating, feed value loss and also acting as a potential trigger for any TMR formed to heat in the feed passage)

To elevate such issues harvesting of rye should be undertaken above (or as close to) 30% dry matter (DM) as possible and rolled to a high density to remove as much air as possible. If the rye is under 30% DM the risk of effluent formation in the bunker and associated losses will be greater. In order to reduce the potential issues associated with effluent, the chop length of the rye and the method of compaction should take into consideration the DM

Where the DM of the forage is relatively low train wheel compactors should only be used cautiously, and when the DM is below 25% they should not be used as this will lead to the potential formation of effluent saturated layers that can turn the silage butyric.

The choice of inoculant is based on the DM of the forage – at low DM the risk of aerobic instability is low so the focus is entirely on fermentation. At higher DM the focus becomes both fermentation and maintenance of aerobic stability during feedout.

Consideration of sheeting type is critical in all forages, and the benefit of oxygen barrier plastic becomes increasingly important when considering forages with hollow stems. All silage plastics allow a degree of air to pass through them during storage. The diagram, adapted from Bernardes, 2011, shows the advantages of different plastics with regards to allowing air to enter. 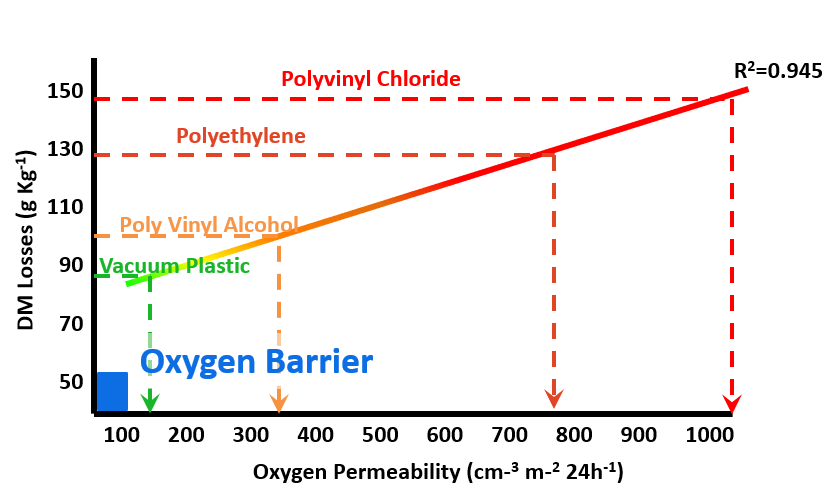 The shoulders and crown of rye silage can be prone to spoilage because of the air penetrating through the plastic and being adsorbed in the hollow stem of the rye silage, creating the perfect environment for the outgrowth of yeast and then mould. Oxygen barrier plastics enormously reduces the passage of oxygen into the top of the silage and therefore reduces the risk of yeast growth (no air means no yeast) and the associated nutrient losses and risk of mycotoxin.

Feedout management of all silages is important, but with rye silage, again because of the hollow nature of the stem and the higher than normal pore space in the silage, the feedout requires careful management in order to avoid aerobic instability in the most challenged areas of the face. Plastic should only be cut back sufficiently for 1 or 2 days feeding and whenever possible a frazer / defacer should be used in order to maintain the integrity of the bunker face. 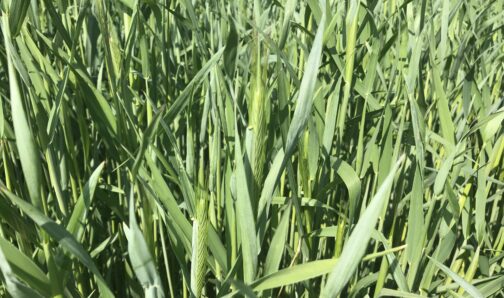 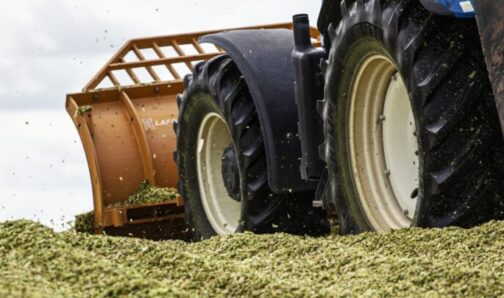 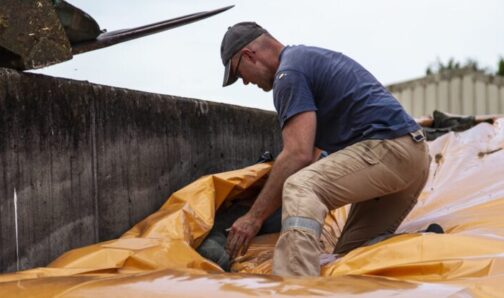 How good was your 2020 silage season and what can you improve in 2021?
Lallemand Silage Experts
╳
Do you have a question? Drop us a line, and our silage experts will respond as soon as possible.
Ask an expert